The Wall Street Journal Dispels the Aging Myth: Reframing What It Means to Age 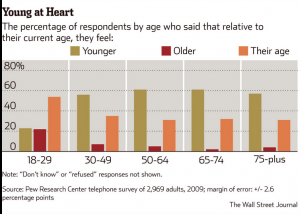 The Wall Street Journal recently highlighted the negative myths about aging that many of us not only frequently hear, but may actually believe. Take this little quiz to see what we mean:

You can probably guess where we are heading with this—all of the statements are false but are pervasively touted as true. Aging has been caricatured as a time of increasing loneliness, and decreasing productivity, cognitive health and vitality. However, growing research from leading institutions around the world has dispelled these aging myths.

Studies have also shown that far from cognitive decline being an inevitable part of aging, there are functions that develop into older age and even some enhanced intelligence.  Ann Tergesen, who authored the Wall Street Journal piece, said, “Expertise deepens, which can enhance productivity and creativity. Some go so far as to say that wisdom—defined, in part, as the ability to resolve conflicts by seeing problems from multiple perspectives—flourishes.”

See the list below for some of the most common myths about aging that recent research has countered:

Check out our past post for more information on dispelling aging myths.

What aging myths are you busting in your own life?