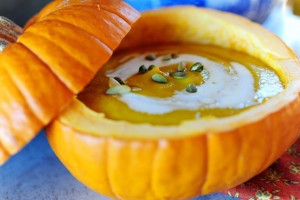 The plethora of pumpkin-containing products on grocery shelves, and in coffeehouses and restaurants has become akin to the Fall Punxsutawney Phil (Mr. Phil is, of course, the beloved groundhog who, according to tradition, is a harbinger of Spring if he doesn’t see his shadow after emerging from his little hole in February) —it’s a sign that Fall is upon us!

While it’s true that some of these products are laden with added sugars and oils not conducive to a balanced, healthy diet, pumpkin itself is indeed a super food! What exactly are the benefits of Fall’s hallmark squash?

It’s important to note that pumpkin as a whole food carries all these health benefits, but isolated supplementation of beta-carotene (the carotenoid present in pumpkin) does not! The Carotene and Retinal Efficacy Trial (CARET) actually found negative effects associated with the beta-carotene supplementation.

This finding adds to the literature emphasizing that the best way to reap the benefits of superfoods is to eat them in their naturally occurring, whole form. Nutrients are described as acting “synergistically,” so trying to isolate them from natural sources can have unintended and unpredictable consequences.

While many of us think of pumpkin pie and other desserts incorporating the squash, there are many healthy ways to incorporate pumpkin into your diet. Add chunks to a stew or vegetable medley, sprinkle seeds on your salad, roast seeds for an easy snack, or use pumpkin puree in soups, smoothies or as a spread. Canned pumpkin puree is available year-round, but we recommend taking advantage of fresh pumpkin while it’s in-season. Organic pumpkin puree can be found at Trader Joe’s and most other grocery stores.

Here’s a festive Pumpkin Soup recipe from the Mayo Clinic:

Happy fall! What are your favorite pumpkin recipes?