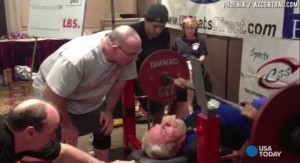 A common theme that often emerges when men and women in their 80s and beyond are asked what they think has contributed to their successful aging is the role of consistent physical exercise. Physical activity has been shown to help prevent or delay the onset of many critical conditions, including heart disease, stroke and high blood pressure.

Physical activity can be adapted to fit all levels of mobility and strength. Many older adults take part in low-impact exercises such as simple stretches using resistance bands, walks around the block, and water aerobics. Others choose to take on a more rigorous fitness routine – even well into their 90s. We would like to highlight four individuals whose active lifestyles speak against the claim that we must slow down as we age.

Bette Calman, a great-grandmother in her 80s from Australia continues to teach and practice yoga regularly. Bette rose to fame in the 1950s as a yoga expert and has been featured in numerous articles, hosted own TV show and written three books about the health benefits of yoga. She credits yoga with benefiting her physically, emotionally, mentally and spiritually. Thanks for being an inspiration to us all, Bette!

Sy Perlis, a 91-year-old man from Surprise, Arizona, became the world record holder in the bench press for the 90+ division. He set the mark by hoisting 187.5 pounds at the National Push-Pull Bench Press and Dead Lift Championships. This feat alone is an amazing accomplishment, but what is even more remarkable, is that Sy, a World War II veteran, achieved this honor a year after surgery to fix a hernia and insert a pacemaker. Congratulations, Sy!

Next up is Harold Bach, a recent competitor at the Minnesota Senior Games. A native of North Dakota, the 93-year-old was the oldest participant present at the competition, but that didn’t stop him from dominating the field. Harold took gold medals in all his events, sweeping the 50-, 100-, 200- and 400-meter dashes. Harold is a veteran of World War II as well as a cancer survivor. Thanks for being a model of healthy fitness for people of all ages, Harold!

Finally, 92-year-old Karin Conradi of Edmonton, Alberta, stays active through a rigorous routine at the gym with a trainer once a week. She keeps her muscles strong with sit-ups, planks, squats and push-ups, which enables her to continue living independently. She recently ripped out her carpet by herself and often does her own yard work. Her exercise regimen has undoubtedly contributed to her overall health and wellness; she still drives safely and only takes one medication. Keep it up, Karin!

Do you have an inspirational story about a senior?  Share it in the comments section below!