Happy to 102: An Interview with Ephraim Engleman

The last surviving member of the Stanford class of 1933, Dr. Ephraim Engleman, is turning 102 in a few weeks. He serves as a shining example of healthy longevity — he continues to work part-time, filling his role as director of the Rosalind Russell Medical Research Center for Arthritis and occasionally seeing patients. Dr. Engleman told us he has no intentions of retiring. A violinist and music prodigy since the age of 6, he continues to play the violin regularly, hosting chamber music meetings at his home every Monday night. Dr. Engleman lives in San Mateo with his wife, Jean, who is 97. They have three children, whose achievements are as impressive as his, and six grandchildren. 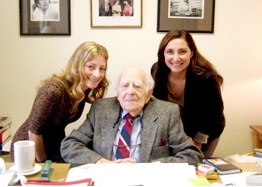 It’s hard for us at Home Care Assistance to not be amazed by Dr. Engleman’s graceful aging, which he attributes in part to his work, music and successful family life. We want to thank Dr. Engleman for sitting down with us to share his secret to healthy longevity and living a happy life — we now have the honor to share his wisdom with you.

What do you think is the secret to aging well? Do you think continuing to work past the traditional retirement age has contributed to your healthy longevity?

I think that continuing to work past the traditional retirement age does indeed contribute — I think it’s contributed to my longevity. Now there are exceptions. But it’s obvious that some people can retire from what they’re doing and go on to other things that keep them mentally and physically active; in that case you’re sort of retiring from one thing and going on to something else. But if you don’t have [a new hobby or activity of interest], then I think one is making a terrible mistake.

We’ve read your 10 commandments for longevity in the San Francisco Gate from 2011. They gave us a good laugh. Would you modify these in any way today? Have any recent events made you feel differently about these tips? Which do you think is the most important?

Most of those are facetious. I think I did it simply to indicate that I really don’t know, but there are certain things that I do recommend. I would re-emphasize the importance of avoiding falls at all costs. That is terribly important. As we get older we tend to lose balance a little bit and falls can be very serious and cause all kinds of problems. Falls, particularly in the elderly, not only can cause serious fractures, but as a result, there can be serious effects on the heart and on blood pressure. I think hobbies can be helpful. In my case, music has been very helpful, emotionally.

What initially drew you towards rheumatology?

When I was a senior resident in medicine in Boston, I heard a man by the name of Walter Bauer, who was doing some pioneer research in arthritis, speak and I was very impressed by what he had to say. He was a professor at Harvard and worked at the Massachusetts General Hospital in Boston. He had a very limited number of fellowships available. Believing that I had nothing to lose, I applied for one of these fellowships without any real expectation I would get into the program. When I was visiting him at the hospital somebody came and interrupted us and said, “Ward rounds are about to start.” Dr. Bauer said, “Would you like to join us on these ward rounds?” and I said “Sure.”

We visited several patients, one of whom had a heart murmur that was a musical murmur. Heart murmurs generally are just a noise that one hears through the stethoscope but rarely does someone have a musical murmur — a murmur that really rings a note. I’m telling you all this because when they heard this note, they were ordering a test that would demonstrate the number of vibrations of this musical note. I said, as I wasn’t very shy, “I don’t need that test; I know how many vibrations it is.” What they didn’t know was that I had perfect pitch, so I knew exactly what note it was and how many vibrations there were. When I told Dr. Bauer this he said that I didn’t need an interview and awarded me the fellowship. I say all of this because that’s the way I became a rheumatologist — through my musical background and my perfect pitch.

What are some of your most cherished memories and why?

There are a lot of things that have happened over my lifetime that were very happy. I have three gold medals — they’re very flattering — one from my medical school, one from UCSF and one from the Professional Society of the United States, the American College of Rheumatology. These gold medals represent recognition, top quality. I’ve been, over the years, the leader in rheumatology as president of the American College of Rheumatology; president of the International League Against Rheumatism, which is in about 40 countries; and I was also chairman of a very important commission.

Rosalind Russell, a very beloved stage and screen actress, developed severe arthritis in her later years (during the 1950s). At that time, there weren’t many doctors who knew anything about arthritis and she was very frustrated. She was able to leverage her notoriety and successfully lobby Congress to pass legislation; the National Arthritis Act was signed by President Ford in 1970 to create a commission which would come up with recommendations on how to improve education and research around arthritis in the United States. I was appointed as the chairman of that commission and so that was a very happy event in my life. When Rosalind died, Congress decided there should be a center for arthritis research designated in her name. The center was developed at UCSF and I’ve been the director of it ever since. That was 1979.

Now there are some things that were very disappointing. When I was an intern at Mt. Zion hospital in San Francisco I had been promised to become a resident — you know, in medical training, a man or a woman starts as an intern in the hospital and then the next step up is you become a resident who is in charge of the interns. Well I had been promised to become a resident by everybody except the chief; the chief vetoed it and decided to give it to somebody else. That was a great disappointment to me. I thought, “Oh, there goes my career” and I was very, very depressed. I got another job there as a resident in pathology. During my year in pathology I did a study on patients who had cancer of the pancreas and I presented this at a meeting of doctors including the chief who had turned me down previously. He was so impressed by this paper that he got me the job here at UCSF as a resident.

I’ve had a couple of medical problems. One was a ruptured appendix, which can be fatal but it wasn’t, I was lucky. And then I had a minor cardiac problem three years ago resulting in a stent. But I think the greatest misfortunes that I have and I still have are related to my ability to play the violin or piano. I had carpal tunnel syndrome. My symptoms were progressing so I had surgery on [my] right hand and the result has been a disaster — I’ve lost all sensitivity in most of the hand. So it makes it difficult to bow.

More recently I’ve developed a slipping tendon in one finger of my left hand which I guess is the result of age, so it interferes with my ability to use my ring finger on my left hand. The results of these are very depressing — not earth-shaking, but it interferes seriously with my ability as a violinist. I am still playing; my colleagues know the problem and they tolerate me.

Who is/was your biggest inspiration and why?

Well, right now, I would say my wife, Jean.

How long have you and Jean been married?

Do you have any advice for the secrets to a happy marriage?

We are honored that our inspiration, Dr. Engleman, took the time to share his thoughts on health, happiness and quality of life so that we can now pass them along to you. We would love to hear what you believe contributes to graceful aging and a long and happy life!